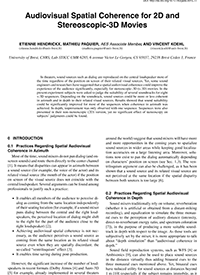 In movie theaters, sound sources such as dialog are often reproduced on the center loudspeaker without regard to the visual position on screen. Some sound engineers and researchers have suggested that spatial audiovisual coherence could improve the audience experience, especially for stereoscopic-3D (s-3D) movies. In the experiment described, subjects were asked to judge the suitability of several soundtracks for eight s-3D sequences. Depending on the soundtrack, sound sources could be more or less coherent in azimuth and depth. Results showed that sound suitability could be significantly improved for most of the sequences when coherence in azimuth was achieved. An improvement in the experience of depth was only observed with one sequence. When sequences were presented in nonstereoscopic (2D) version, there was no significant effect of stereoscopy. Subjects quickly became accustomed to azimuthal coherence, which improved sound suitability throughout the experiment. This suggests that the audience adaptation to a new cinematographic convention regarding spatialization of sound objects would not be a burden.