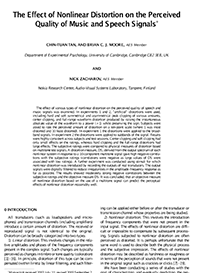 The effect of various types of nonlinear distortion on the perceived quality of speech and music signals was examined. In experiments 1 and 2, "artificial" distortions were used, including hard and soft symmetrical and asymmetrical peak clipping of various amounts, center clipping, and full-range waveform distortion produced by raising the instantaneous absolute value of the waveform to a power (≠1) while preserving the sign. Subjects were asked to rate the perceived amount of distortion on a ten-point scale (where 1 was most distorted and 10 least distorted). In experiment 1 the distortions were applied to the broadband signals. In experiment 2 the distortions were applied to subbands of the signal. Results were highly consistent across subjects and test sessions. Center clipping and soft clipping had only small effects on the ratings, whereas hard clipping and the full-range distortions had large effects. The subjective ratings were compared to physical measures of distortion based on multitone test signals. A distortion measure, DS, derived from the output spectrum of each nonlinear system in response to a 10-component multitone signal gave high negative correlations with the subjective ratings (correlations were negative as large values of DS were associated with low ratings). A further experiment was conducted using stimuli for which nonlinear distortion was introduced by recording the outputs of real transducers. The output signals were digitally filtered to reduce irregularities in the amplitude/frequency response as far as possible. The results showed moderately strong negative correlations between the subjective ratings and the objective measure DS. It was concluded, that an objective measure of nonlinear distortion based on the use of a multitone signal can predict the perceptual effects of nonlinear distortion reasonably well.