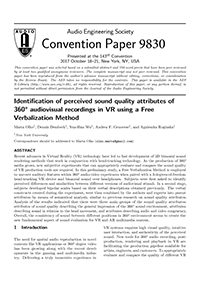 Recent advances in Virtual Reality (VR) technology have led to fast development of 3D binaural sound rendering methods that work in conjunction with head-tracking technology. As the production of 360°  media grows, new subjective experiments that can appropriately evaluate and compare the sound quality of VR production tools are required. In this preliminary study a Free Verbalization Method is employed to uncover auditory features within 360°  audio-video experiences when paired with a 3-degrees-of-freedom head-tracking VR device and binaural sound over headphones. Subjects were first asked to identify perceived differences and similarities between different versions of audiovisual stimuli. In a second stage, subjects developed bipolar scales based on their verbal descriptions obtained previously. The verbal constructs created during the experiment, were then combined by the authors and experts into parent attributes by means of semantical analysis, similar to previous research on sound quality attributes. Analysis of the results indicated that there were three main groups of the sound quality attributes: attributes of sound quality describing the general impression of the 360°  sound environment, attributes describing sound in relation to the head movement, and attributes describing audio and video congruency. Overall, the consistency of sound between different positions in 360°  environment seems to create the new fundamental aspect of sound evaluation for VR and AR multimedia content.