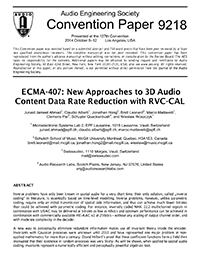 Inverse problems have only been known in spatial audio for a very short time; their only solution, called "inverse coding" in literature, is essentially based on time-level modeling. Inverse problems, however, unlike parametric coding, require only an initial transmission of spatial side information, and thus can achieve much lower bitrates than could be achieved with parametric coding. For instance, inversely coded NHK 22.2 multichannel signals in combination with USAC may be delivered at bitrates as low as 48kb/s and optimum performance can be achieved in combination with commercially available HE-AAC v2 at 256kb/s - without any scaling of output channel order, and with moderate complexity in the decoder. A new way to perceptually eliminate redundant information makes use of invariant theory inside the encoder. Invariants with Gaussian processes were unknown until 2010 and have represented one major problem in non-applied mathematics for more than a century: David Hilbert’s proof that these coefficient functions form a field then insinuated that their existence in random processes was very likely. As will be shown, when applied to spatial audio coding, invariants represent a numerically efficient and perceptually powerful algebraic tool. We likewise present a 3D audio codec design for signals up to NHK 22.2 with two profiles: one profile, based on co-incidence, is able to code and synthesize a full Higher Order Ambisonics soundfield, up to order 6, at 48kb/s, 64kb/s, 96kb/s, 128kb/s, and above. The second profile, which optimizes de-correlation for phantom source imaging, codes channel-based or object-based signals at the same bitrates. The technology has been specified as the world’s first international 3D audio standard ECMA-407 and may be further extended with static models in frequency domain. A preliminary version of this technology, based on a downmix in frequency domain, was submitted to MPEG’s „Phase 2“ selection of low-bitrate 3D coding technologies and made use of an USAC binary, which unfortunately offered no tuning options.