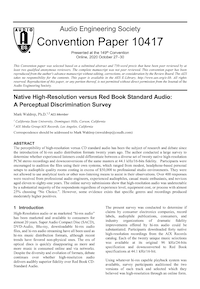 The perceptibility of high-resolution versus CD standard audio has been the subject of research and debate since the introduction of hi-res audio distribution formats twenty years ago. The author conducted a large survey to determine whether experienced listeners could differentiate between a diverse set of twenty native high-resolution PCM stereo recordings and down conversions of the same masters at 44.1 kHz/16-bits fidelity. Participants were encouraged to audition the files using their own systems, which ranged from modest, headphone-based personal setups to audiophile quality rooms costing in excess of $50,000 to professional studio environments. They were not allowed to use analytical tools or other non-listening means to assist in their observations. Over 400 responses were received from professional audio engineers, experienced audiophiles, casual music enthusiasts, and novices aged eleven to eighty-one years. The online survey submissions show that high-resolution audio was undetectable by a substantial majority of the respondents regardless of experience level, equipment cost, or process with almost 25% choosing “No Choice.”. However, some evidence exists that specific genres and recordings produced moderately higher positives.

Comments on this paper